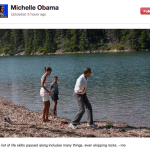 Pinterest is a social bookmarking site that is all about the discovery of visual content. Pinterest users are able to pin or bookmark interesting pictures and videos for their followers. Pinterest also allows users to like or re-pin others posts and organize their favorite pins into boards. Pinterest has over 70 million users, the overwhelming majority of whom are women.

According to the Pew Research Center’s Internet Project, 33% of online women are Pinterest users, compared to just 8% of men. In addition the highest income brackets and the college educated are more likely to use Pinterest. Pinterest users also skew more suburban and rural than urban.

Due to its rising influence online and its power in reaching female audiences,  some politicians have started to incorporate Pinterest into their digital strategies. Below is Arc 3’s list of  the most pinteresting politicians:

The First Lady of the United States is the most popular political  figure on Pinterest and her success persuaded her husband to join. The Organizing for Action staff operates her account, but she manages to post pins herself using the signature “-MO”. Her pins range from recipe ideas to background scenes at the White House to family. The First Lady’s most popular board is titled “Recipe Ideas” which has over 53k followers.

In the majority of listicles regarding politicians and social media platforms, President Obama consistently ranks first with the most followers. However, on Pinterest, President Barack Obama comes in 2nd behind his spouse, the First Lady. The President’s pins range from behind the scenes photos of the First Family to campaign photos to more unique boards such as “Obamart” to “Pet Lovers for Obama”. The President’s most popular board is entitled “First Family” which has over 37k followers.

Mrs. Romney, wife of the 2012 Republican Presidential nominee, Mitt Romney, adorns her Pinterest page with photos of her five children and 22 grandchildren. Her love of cooking is evident by her many recipe pins including one of her cookbook The Romney Family Table. An avid reader, she also shares her books worth reading, including David McCullough’sMornings on Horseback about the young life of Theodore Roosevelt. Ann Romney’s most popular board is “Recipes” which has over 15k followers.

The actor and former body builder and 38th Governor of California has a substantial following on Pinterest. The Terminator’s  pins and boards consist of photos from his acting, bodybuilding and past service as Governor of California. He also highlights the charitable causes he supports as well as his autobiography Total Recall.

The former 2012 Republican nominee for President still has a significant following on Pinterest despite his last pin being over a year ago. The majority of Governor Romney’s pins were during the 2012 campaign and consisted of  family, campaign infographics and paraphernalia and behind the scenes pictures from his campaign. Like his wife Ann’s page, he highlights his favorite books, including a wide range of titles from John Steinbeck’s East of Eden to Ron Hubbard’s Battleship Earth to David Landes’ The Wealth and Poverty of Nations. Mitt Romney’s most popular board is entitled “Mitt Gear” which has 5,765 followers.

The former Republican House Speaker and Presidential candidate had one of the strongest presences on social media out of the Republican candidates for President in 2012. Winner of the first Republican Presidential primary in the South, South Carolina, Gingrich has a strong following on Pinterest, despite having not posted in over a year. Newt’s pins include behind the scenes photos from the 2012 campaign trail and books that he has authored ranging from Valley Forge to Rediscovering God in America to Real Change.

Lt. Governor Newsom was the youngest Mayor of San Francisco in over 100 years and is now the 49th Lieutenant Governor of California. The fourth-generation Californian’s Pinterest boards reflect his love of San Francisco’s sports teams the 49ers and the Giants; technology; and wine.

These are the top politicians on Pinterest at mid-year 2014. As social media continues to become more and more visual, we expect more politicians to adopt Pinterest, especially those with a gender gap in their level of support from female voters. Pinterest’s ability to reach and persuade female audiences should not be dismissed by politicians. It is also a powerful tool for driving female voters to a politician’s website.

Want to learn how social media platforms like Pinterest can help your organization?  Give us a call. We’d be happy to sit down with you and learn more about your marketing efforts and share with you how we can make social media work for your advocacy, citizen engagement or grassroots efforts.