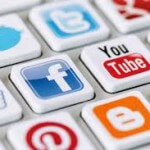 Social media can be a powerful tool for elected officials and government agencies to convey their message and build relationships with constituents. When used properly, social media can help an agency or official achieve key legislative, policy and civic engagement goals and objectives.

Last April, the New York City Police Department launched #myNYPD to encourage constituents to share positive images of themselves with police officers. As the campaign unfolded on Twitter, residents happily posed with the many officers that they respect for the important things that they do each day to help out locals and tourists.

Do you have a photo w/ a member of the NYPD? Tweet us & tag it #myNYPD. It may be featured on our Facebook. pic.twitter.com/mE2c3oSmm6

However, the campaign quickly took a negative turn, as critics of the NYPD such as Occupy Wall Street, began to post unflattering photos of police in confrontation with protesters during tense moments.

Do you have a photo w/ a member of the #NYPD? Tweet us & tag it #myNYPD. It may be featured on their Facebook! pic.twitter.com/Ps7rThxgNw — Occupy Wall Street (@OccupyWallStNYC) April 22, 2014

The level of engagement with #myNYPD was much more intense from the critics of the New York Police Department than from its supporters. This is most likely the result of a failure of the communications officers of the Department to first promote the #myNYPD hashtag during a pre-launch phase to friends and supporters, guaranteeing positive posts to the hashtag.

2. The British Embassy ‘celebrates’ the burning of the White House

Last August the British Embassy tweeted a photo joking about the day the Redcoats burned down the White House during the War of 1812. The tweet showed a cake topped with a mini White House and sparklers. “Commemorating the 200th anniversary of burning the White House. Only sparklers this time!” the tone-deaf tweet said.

Commemorating the 200th anniversary of burning the White House. Only sparklers this time! pic.twitter.com/QIDBQTBmmL

However, the lack of tact from the British diplomatic corps was surprising. Most likely the tweet was the result of a lack of judgement from a social media manager of the British Embassy. A content calendar process with review by senior leadership could have avoided such an error in judgement. It is always good practice to have more than one person to review a tweet or a content idea.

Last April at the end of Sexual Assault Awareness month, Massachusetts officials were quickly under fire after an offensive tweet about sexual assault was sent from a government Twitter account.

“Sexual assault is always avoidable,” read the tweet, posted by the account @MassGov which linked to information about sexual assault prevention. It was later deleted.

Mass.gov Executive Director of Geoff Kula quickly issued an apology for the poorly worded tweet, which was rightly called disgusting and disappointing on social media by a groundswell of critics. In his statement of apology, Mr. Kula noted that there was an editorial gatekeeper who reviews all social media content to ensure consistency in messaging, including appropriateness, tone and voice. He further noted that the author of the sexual assault awareness tweet did not send this tweet to the editorial gatekeeper for review, and instead scheduled the tweet independently.

The incident highlighted the importance of staff following established procedures for content production and distribution. Even if you have established the best procedures for social media management, if they are not executed or followed, they are meaningless.

The First Lady is a strong advocate for healthier foods and nutrition, especially for families and children. In an effort to promote eating vegetables, Mrs. Obama did a short video in which she danced with a turnip. The short video was posted in the White House Vine feed.  Short video is a very effective social media tactic. However, tactics must be backed up by sound strategy and messaging. Even the best social media teams are victim of an urge to utilize the latest tools and tactics at the expense of strategic objectives. Every social media team must ask themselves “why are we doing this piece of content ? Is it just to utlilize the latest tools? Or are we trying to achieve an objective for our organization?”

During the annual White House Thanksgiving turkey-pardoning ceremony, Elizabeth Lauten, then Communications Director for Tennessee Congressman Stephen Fincher, posted on Facebook her thoughts about the dress and behavior of the First Daughters, Sasha and Malia at the event. 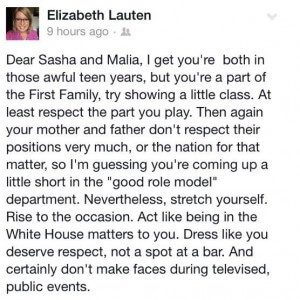 The press secretary’s comments on her personal Facebook account, quickly became fodder for reporters as her post was shared across the Facebook platform. The post was soon screensaved and shared with internet news outlets such as Gawker, who posted her comments on their highly trafficked site. Ms. Lauren subsquently apologized for her comments and resigned her position. Elected Officials and their staff, should never assume that their digital comments are ever private. If it is posted digitally, whether marked private or not, it will end up being viewed by unintended audiences such as the media and political opponents who hinge on every word that you say, often looking for a mistake.

Does your social media program for your agency or elected official office need a refresher? Contact us for information on our social media strategic planning and social media training programs for government that can keep you prepared and on top of your game in the ever-changing digital environment.